Our paper Large Modulus Ring-LWE ≥ Module-LWE — together with Amit Deo — was accepted at AsiaCrypt 2017. Here’s the abstract:

to the ring learning with errors problem (RLWE) with modulus

by a quadratic factor in the ring dimension

and a square root in the module rank

for power-of-two cyclotomics. Since, on the other hand, MLWE is at least as hard as RLWE, we conclude that the two problems are polynomial-time equivalent. As a corollary, we obtain that the RLWE instance described above is equivalent to solving lattice problems on module lattices. We also present a self reduction for RLWE in power-of-two cyclotomic rings that halves the dimension and squares the modulus while increasing the error rate by a similar factor as our MLWE to RLWE reduction. Our results suggest that when discussing hardness to drop the RLWE/MLWE distinction in favour of distinguishing problems by the module rank required to solve them.

Our reduction is an application of the main result from Classical Hardness of Learning with Errors in the context of MLWE. In its simplest form, that reduction proceeds from the observation that for

small it holds that

Thus, if there exists an efficient algorithm solving the problem in

, we can use it to solve the problem in

In our paper, we essentially show that we can replace integers mod

with the ring of integers

of a Cyclotomic field (considered mod

). That is, we get the analogous reduction from

(RLWE). The bulk of our paper is concerned with making sure that the resulting error distribution is sound. This part differs from the Classical Hardness paper since our target distribution is in

END_OF_DOCUMENT_TOKEN_TO_BE_REPLACED

Our — together with Florian Göpfert, Fernando Virdia and Thomas Wunderer — paper Revisiting the Expected Cost of Solving uSVP and Applications to LWE is now available on ePrint. Here’s the abstract:

Reducing the Learning with Errors problem (LWE) to the Unique-SVP problem and then applying lattice reduction is a commonly relied-upon strategy for estimating the cost of solving LWE-based constructions. In the literature, two different conditions are formulated under which this strategy is successful. One, widely used, going back to Gama & Nguyen’s work on predicting lattice reduction (Eurocrypt 2008) and the other recently outlined by Alkim et al. (USENIX 2016). Since these two estimates predict significantly different costs for solving LWE parameter sets from the literature, we revisit the Unique-SVP strategy. We present empirical evidence from lattice-reduction experiments exhibiting a behaviour in line with the latter estimate. However, we also observe that in some situations lattice-reduction behaves somewhat better than expected from Alkim et al.’s work and explain this behaviour under standard assumptions. Finally, we show that the security estimates of some LWE-based constructions from the literature need to be revised and give refined expected solving costs.

Our work is essentially concerned with spelling out in more detail and experimentally verifying a prediction made in the New Hope paper on when lattice reduction successfully recovers an unusually short vector.

the unusually short vector in some lattice

the block size used for the BKZ algorithm and

, then the New Hope paper predicts that

can be found if

under the assumption that the Geometric Series Assumption holds (until a projection of the unusually short vector is found).

The rationale is that this condition ensures that the projection of

orthogonally to the first

) is shorter than the expectation for the

satisfying the above inequality, the actual behaviour would deviate from that predicted by the GSA. Finally, the argument can be completed by appealing to the intuition that a deviation from expected behaviour on random instances — such as the GSA — leads to a revelation of the underlying structural, secret information. In any event, such a deviation would already solve Decision-LWE.

In our work, we spell out this argument in more detail (e.g. how

) and throw 23k core hours at the problem of checking if the predicted behaviour, e.g. 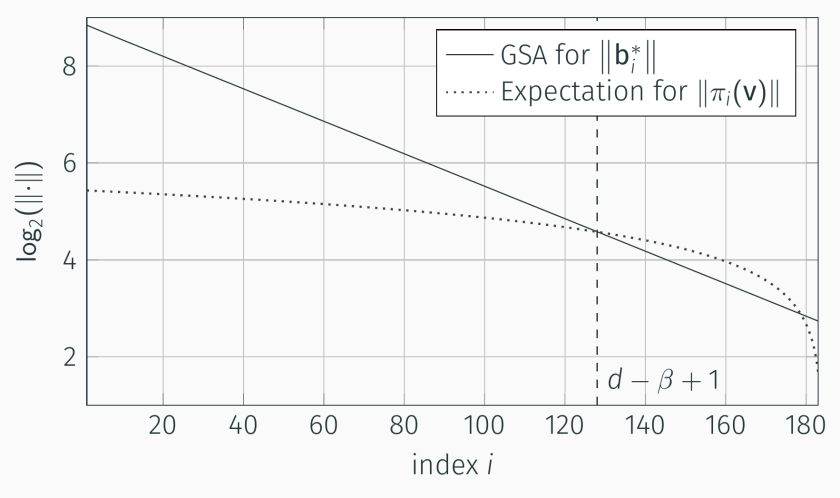 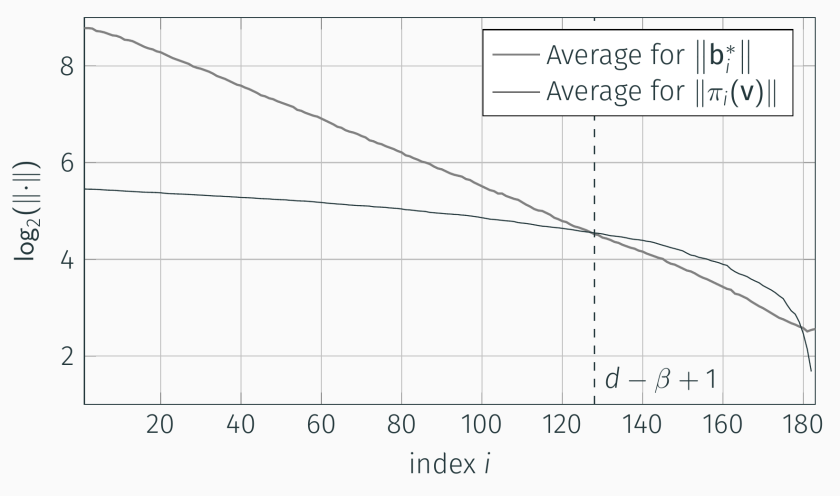 Just like for the above plots, the general answer is a clear “yes”.

I forgot the most important bit. The behaviour of the BKZ algorithm on uSVP(-BDD) instances can be observed in this video.

is then immediately recovered using size reduction. The grey area is the currently worked on block. The notation in the legend isn’t consistent with the plots above or even internally (

), but the general idea should still be apparent. In case you’re wondering about the erratic behaviour of the tails (which occasionally goes all over the place), this is due to a bug in fpylll which has recently been fixed.

My paper on solving small, sparse secret instances is now on ePrint. Here’s the abstract:

We present novel variants of the dual-lattice attack against LWE in the presence of an unusually short secret. These variants are informed by recent progress in BKW-style algorithms for solving LWE. Applying them to parameter sets suggested by the homomorphic encryption libraries HElib and SEAL yields revised security estimates. Our techniques scale the exponent of the dual-lattice attack by a factor of

, when the secret has constant hamming weight

is the maximum depth of supported circuits. They also allow to half the dimension of the lattice under consideration at a multiplicative cost of

, while the techniques described in this work lead to estimated costs of 68 bits (SEAL) and 62 bits (HElib).

If you want to see what its effect would be on your favourite small, sparse secret instance of LWE, the code for estimating the running time is included in our LWE estimator. The integration into the main function estimate_lwe is imperfect, though. To get you started, here’s the code used to produce the estimates for the rolling example in the paper.

Together with Rachel Player and Sam Scott (both also from the Information Security Group at Royal Holloway, University of London) we finally managed to put our survey on solving the Learning with Errors problem out. Here’s the abstract:

The Learning with Errors (LWE) problem has become a central building block of modern cryptographic constructions. This work collects and presents hardness results for concrete instances of LWE. In particular, we discuss algorithms proposed in the literature and give the expected resources required to run them. We consider both generic instances of LWE as well as small secret variants. Since for several methods of solving LWE we require a lattice reduction step, we also review lattice reduction algorithms and use a refined model for estimating their running times. We also give concrete estimates for various families of LWE instances, provide a Sage module for computing these estimates and highlight gaps in the knowledge about algorithms for solving the Learning with Errors problem.

END_OF_DOCUMENT_TOKEN_TO_BE_REPLACED

our paper (with Jean-Charles Faugère, Robert Fitzpatrick and Ludovic Perret) on solving small secret LWE faster just hit ePrint (and was accepted for presentation at PKC 2014)

Abstract. Some recent constructions based on LWE do not sample the secret uniformly at random but rather from some distribution which produces small entries. The most prominent of these is the binary-LWE problem where the secret vector is sampled from {0, 1}* or {-1, 0, 1}*. We present a variant of the BKW algorithm for binary-LWE and other small secret variants and show that this variant reduces the complexity for solving binary-LWE. We also give estimates for the cost of solving binary-LWE instances in this setting and demonstrate the advantage of this BKW variant over standard BKW and lattice reduction techniques applied to the SIS problem. Our variant can be seen as a combination of the BKW algorithm with a lazy variant of modulus switching which might be of independent interest.

We — with Jean-Charles Faugère, Robert Fitzpatrick and Ludovic Perret – managed to finish our work on the cryptanalysis of all proposed parameters of the public-key encryption scheme proposed at PKC 2012 by Huang, Liu and Yang. The key observation is that the scheme can be viewed as an easy LWE instance:

In this paper, we investigate the security of a public-key encryption scheme introduced by Huang, Liu and Yang (HLY) at PKC’12. This new scheme can be provably reduced to the hardness of solving a set of quadratic equations whose coefficients of highest degree are chosen according to a discrete Gaussian distributions. The other terms being chosen uniformly at random. Such a problem is a variant of the classical problem of solving a system of non-linear equations (PoSSo), which is known to be hard for random systems. The main hypothesis of Huang, Liu and Yang is that their variant is not easier than solving PoSSo for random instances. In this paper, we disprove this hypothesis. To this end, we exploit the fact that the new problem proposed by Huang, Liu and Yang reduces to an easy instance of the Learning With Errors (LWE) problem. The main contribution of this paper is to show that security and efficiency are essentially incompatible for the HLY proposal. That is, one cannot find parameters which yield a secure and a practical scheme. For instance, we estimate that a public-key of at least 1.03 GB is required to achieve 80-bit security against known attacks. As a proof of concept, we present practical attacks against all the parameters proposed Huang, Liu and Yang. We have been able to recover the private-key in roughly one day for the first challenge proposed by HLY and in roughly three days for the second challenge.

Furthermore, I gave a talk yesterday on solving LWE with binary secret using a variant of the BKW algorithm at SIAM AG’13.

We have updated our pre-print titled “On the Complexity of the BKW Algorithm on LWE” on ePrint.

There are two main changes and the reasons why I am mentioning this update here.

malb::blog
Create a free website or blog at WordPress.com.